Many people now understand that they can participate in their own wellbeing and that regular exercise plays an important role for general health.

In general 30 minutes of walking a day, or more vigorous aerobic exercise if you are fit, is good to stimulate the system and remove toxins from the body.

Here is a selection of practices which i consider excellent to enhance wellness, some of which can also be done in a sitting position for those people with health or mobility issues.

One of the most important things to remember is that we need to keep our energies moving to stay healthy, so even a little movement is better than nothing and even 10minutes in the morning and 10minutes in the evening makes a difference to your general health.

So take a look and see which one you fancy!

The Chinese are one of the few cultures who have preserved accurate knowledge about how to stay healthy and they have documented advise in such a way that it is easy to follow.

They believe that the practice of Qigong and Tai Chi give resistance to disease, helps you to feel good, have greater stamina, energy and to live longer, healthier happier life. Incorporating either of these practices into your life can be of great benefit.

Holistic yoga, although not an official type, is more of a lifestyle approach which combines the ideal of holism and the practice of yoga. It focuses on a person’s entire routine, rather than the physical practice of yoga alone. The student learns to apply the key concepts of both holism and yoga to his or her daily life, thus creating a lifestyle. Many students of yoga already practice holistic yoga without necessarily realizing it, due to the key principles that yoga teaches practitioners to incorporate into their lives.

Yoga is the Sanskrit word for «union,» and it refers to the mind-body connection. The practice is over 5000 years old, and although its original has been placed in India, it is widely practiced. The terms used to describe the types of yoga come from the Hindu Vedas, or spiritual writings. It was developed as means to clean and perfect the body for proper energy transmission.

The main types of yoga are Hatha, Vinyasa, Ashtanga, Iyengar, Kundalini, and Bikram. The «eight limbs» of yoga refer to what body parts and what types of breathing the individual poses are intended for. Yoga poses, or asanas, are combined with individual breathing exercises in order to harmonize the body, and to accelerate the mind-body connection. 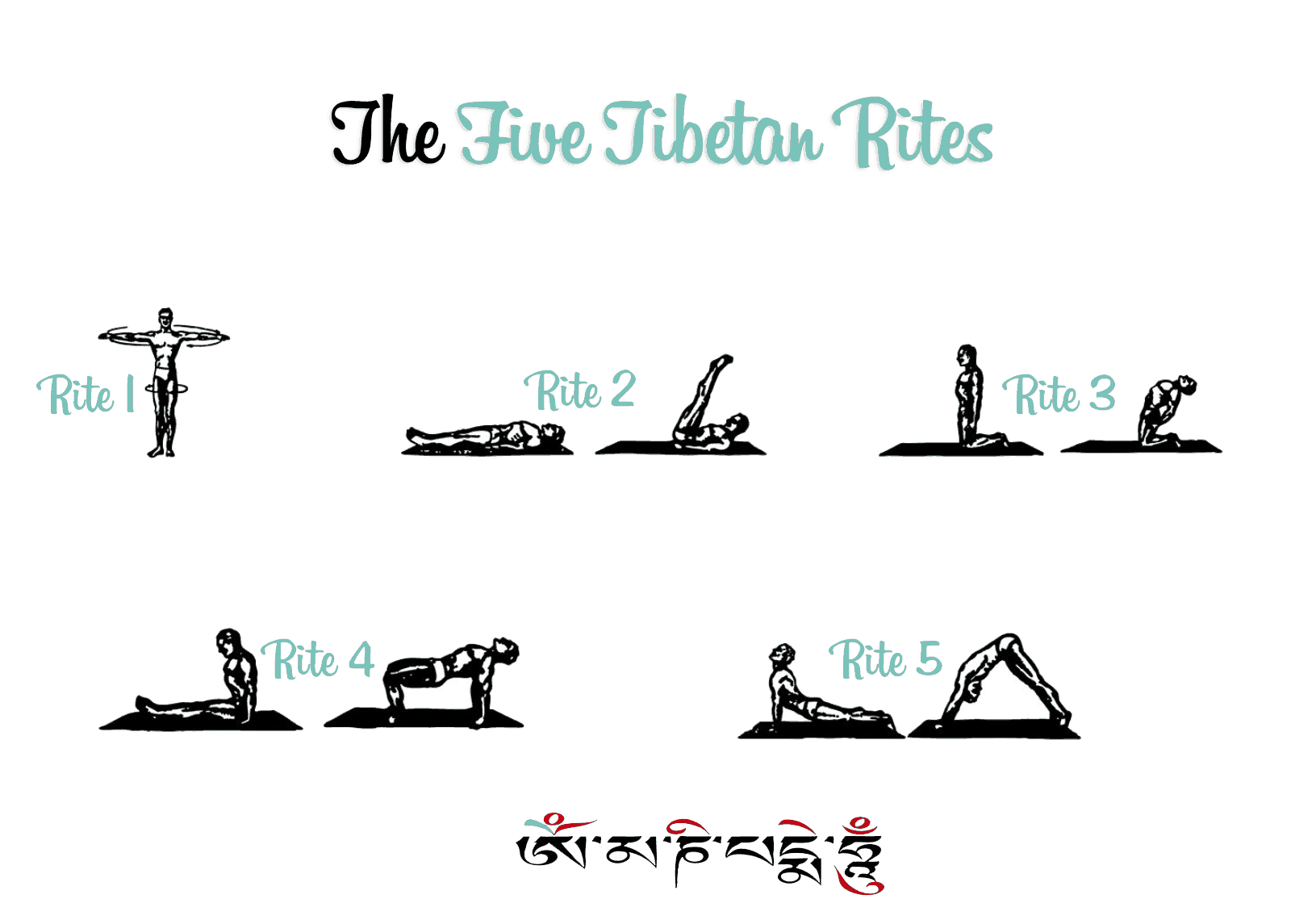 The Five Tibetan Rites: Exercises for Healing, Rejuvenation, and Longevity

The rites were first discovered by a british army officer who travelled to tibet and published a book in 1939. In 1985 a book called The Ancient Secret of the Fountain of Youth written by Peter Kelder was published which for the first time fully described an exercise program for «youthing». This is an exercise program used by Tibetan monks to live long, vibrant and healthy lives. In fact, this book states that many have lived longer than most can imagine by following the program often called the «Five Tibetan Rites». The benefits are described in this book and a subsequent book 2 with an expanded description of the program by the publisher called the Ancient Secret of the Fountain of Youth – Book 2, a companion to the original book.

Potential Benefits of the Five Rites

There are many examples of the benefits of the «Five Tibetan Rites» including the following: looking much younger; sleeping soundly; waking up feeling refreshed and energetic; release from serious medical problems including difficulties with spines; relief from problems with joints; release from pain; better memory; arthritis relief; weight loss; improved vision; youthing instead of aging; greatly improved physical strength, endurance and vigor; improved emotional and mental health; enhanced sense of well being and harmony; and very high overall energy.

How the Five Rites Work

The rites represent a system of exercise that affects the body, emotions, mind and consist primarily of 5 exercises that are very similar to simple yoga poses. The Tibetans claim that these exercises activate and stimulate the seven key chakras that in turn stimulate all the glands of the endocrine system. The endocrine system is responsible for the body’s overall functioning and aging process. This means that the Five Rites will affect the functioning of all your organs and systems, including the physical and energetic systems and that includes the aging process. The man who brought these Five Rights out of Tibet stated that «performing the Five Rites stimulates the circulation of essential life energy throughout the body».

Chakra is an Indian Sanskrit word that translates to mean «Wheel of Spinning Energy». Chakras are spinning wheels or vortexes of energy of different color that perform many functions connecting our energy fields, bodies and the Cosmic Energy Field. Chakras are powerful electrical and magnetic fields. Chakras govern the endocrine system that in turn regulates all of the body’s functions including the ageing process. Energy flows from the Universal Energy Field through the chakras into the energy systems within our bodies, including the Meridian System.

Our bodies contain seven major chakras or energy centers and 122 minor chakras. The major chakras are located at the base of the spine (Root Chakra), at the navel (Sacral Chakra), in the solar plexus (Solar Plexus Chakra), within your heart (Heart Chakra), within the throat (Throat Chakra), at the center of your forehead (Brow or Third Eye Chakra), and at the top of your head (Crown Chakra). These chakras are linked together with all other energy systems in the body and various layers of the auras.

The Five Rites speed up the spinning of the chakras, coordinate their spin so they are in complete harmony, distribute pure prana energy to the endocrine system, and in turn to all organs and processes in the body. This is one of the major requirements for vibrant health, rejuvenation and youthfulness.

Rejuvenate Your Mind and Body with 5 simple Exercises!

This program is often described as a modified yoga program. Simply put, yoga is a science that unites the body, mind and spirit. Today this is often called Mind/ Body Healing. The author of the book believes that yoga was brought to Tibet from India in the 11th or 12th century and that Tibetan monks over time developed modified these exercises and developed an effective program of exercises that western society now calls the «Five Tibetan Rites». The rugged mountainous conditions these monks live in may well account for their particular emphasis on vigor. Many of the yoga exercises and practices being taught in the western world today are very new. The «Five Tibetan Rites» are exactly what the ancient Tibetans developed over many centuries of time. Therefore it’s very important to do the «Five Tibetan Rites» exactly as they are presented without altering the form or sequence to achieve some of the benefits accrued to these «Rites».